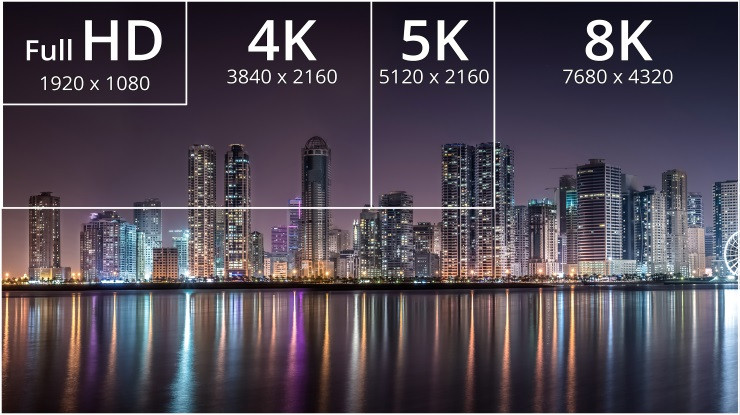 Whilst most screens and projectors are mostly 1080p or 4k we are already contemplating the arrival of 8K.

Watching live sports or screen media advertising on a large screen in Bars, hotel lobbies or even outdoor screens on a deck of a cruise ship the closer you sit to immersive your viewing experience from a 1080P or 4K screen, the pixels can become a visible distraction. However, with 8K, the screen needs to be extremely large to expose the visible picture structure.

With the amount of detail that 8K can provide even if you are only a few inches away from a screen as large as 70-inches or more, the image appears to be “pixel-less”. As a result, an 8K TV is perfect for even wall-size movie viewing, as well as for displaying fine detail, such as text and graphics on average and large size PC monitors and digital signage displays.

Imagine the wow factor from a large 8K format video wall and how it could enhance the overall effect from theatre lighting systems!
This can be used by lighting companies to bring new dynamics to any performance lighting project.

Outdoor digital signage would also be another industry that could benefit from this.

One of the leaders in developing 8K for TV broadcasting is NHK of Japan which has proposed its Super Hi-Vision video and broadcast format as a possible standard.

This broadcast format is not only intended to display 8K resolution video, but can also transfer up to 22.2 channels of audio for any sound system. The 22.2 channels of audio can be used to accommodate any current or forthcoming surround sound format, as well as providing a way to supply multiple language audio tracks – which would make universal worldwide TV broadcasting more practical.

As part of their preparation, NHK is aggressively testing 8K in the TV broadcasting environment with the eventual goal to provide 8K broadcasting feeds for the 2020 Tokyo Summer Olympics.

However, even if NHK is able to provide the 8K broadcast feeds, another issue is how many partner broadcasters (such as NBC – the official Olympics broadcaster for the U.S.) will be able to pass them along to viewers, and will those viewers have 8K TVs that will be able to receive them?

Years have gone by when we were exposed to the mass hype over HDMI (1080) most of the population were not in possession of TVs and displays that accepted this new exciting format and even when we rushed out to purchase them, we had limited choices of broadcasts being transmitted in HDMI.
Now though its a given that we expect nothing less.

Although we still have limited broadcasts in 4K and 4K displays and screens, I wonder how long it will take for 1080p and 4K to be a thing of the past?.

It was interesting to witness the latest in large screen projection in 8K at my recent visit to ISE at the RAI Amsterdam. Below is one of many that will become the “normal’ in the not too distant future. 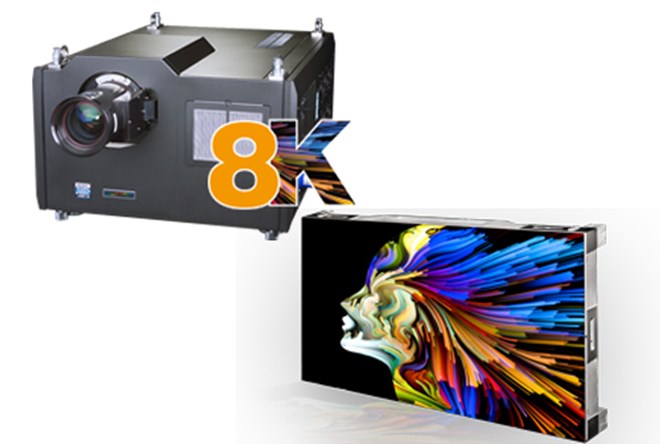 Set to be the world’s first commercially available DLP® laser 8K projector, the INSIGHT Dual Laser 8K sits in a class of its own when it comes to performance. Providing an ultra-high 8K resolution (7680 X 4320) of 33-million pixels through 25,000 ANSI lumens of solid-state laser-phosphor illumination, the new flagship projector is the ultimate solution for the most elaborate medical, scientific and immersive visualisation and large-venue applications.

FREE Consultancy -
Let us know how we can help your business!

Fill out the short form below and we'll call you back!